How employers can embrace the ‘Freedom Day’ delay

Speculation over the weekend was rife in anticipation of the government delaying the end to all Covid restrictions in England on 21 June. Last night Boris Johnson confirmed that the lifting of restrictions will be 19 July, with a review in two weeks’ time.

The Prime Minister has emphasised how he wants the final stage of the easing of restrictions to be “irreversible” – a move which cannot yet be certain in light of the increasing cases of the Delta variant and hospital admissions. Whilst understandably frustrating for certain sectors, here we outline how employers can prepare for the complete unlocking on the horizon. 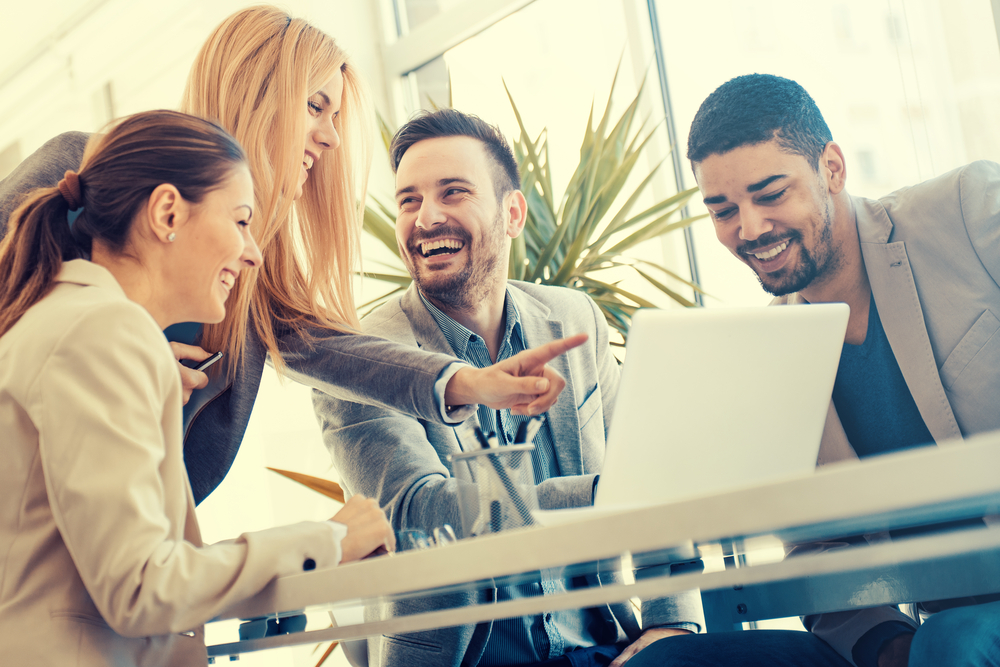 The vaccination rollout versus hospitalisations

The concerning increase in cases of the Delta variant and the impact on hospitalisations has been the driver for moving “freedom day” as some have termed it. The most severe cases have been amongst those yet to receive their second vaccine. The delay, based on the current rates of vaccination, will enable around 10 million second doses to be administered. This means around three quarters of adults will be fully vaccinated with both doses by 19 July.

However, many have warned that delaying lockdown will negatively impact so many sectors. With reports that 300,000 employees in the hospitality sector and 400,000 in the wedding sector alone are still on furlough, it is understandable that certain sectors will be frustrated by the evolving roadmap. However, more than 30 guests will be able to attend a wedding from 21 June, a welcome development for this sector.

Whilst the government accepts that we will have to learn to live with the virus, the Foreign Secretary Dominic Raab has said that ministers “don’t want to yo-yo in and out of measures”. The key restrictions to remain in place include:

“We would be calling for the government to provide further cash grants, at least equivalent to levels provided during the first lockdown, and to delay the tapering of government payments into the furlough scheme, planned for the start of July.”

As businesses have reacted to the delay, many have pointed out that whilst continuing restrictions are a very difficult choice, the roadmap was always subject to the data. UK Hospitality, a representative body of pubs, bars and restaurants, has called for greater levels of government support. Meanwhile The Night Time Industries Association, which represents nightclubs, said that many businesses were given insufficient warning of the delay and 54 per cent had ordered stock, 73 per cent had called in staff and 60 per cent had sold tickets out of the venues it surveyed. The delay is compounding the effect of the 15-month closure nightclubs have experienced.

“We would be calling for the government to provide further cash grants, at least equivalent to levels provided during the first lockdown, and to delay the tapering of government payments into the furlough scheme, planned for the start of July. The government should also look at extending the trade credit reinsurance scheme beyond the end of June to minimise possible disruptions in insurance coverage.” The British Chambers of Commerce co-executive director Claire Walker

In response, the Treasury has pledged its commitment to helping businesses and individuals through the extension by its decision to provide certainty over the summer through the furlough scheme and support offered to the self-employed being in place until September. Eligible businesses can also access business rates relief, VAT reductions and the Recovery Loan Scheme.

Whilst Chancellor Rishi Sunak accommodated lockdown easing delays when he extended these support measures until the end of September, it does mean that the level of support starts to decrease from July. From 1 July, employers will have to pay 10 per cent of an employee’s wage, rising to 20 per cent in August as taxpayer support is cut from 80 per cent. Similarly, retail, hospitality and leisure businesses have been offered 100 per cent relief on business rates which is due to be reduced to 66 per cent from 1 July and is set to remain until the end of March 2022.

Employee anxiety is being reported in numerous forms. From anxiety about returning into the physical workplace where some might be worried about catching Covid to worrying about returning to the commute on public transport, there are numerous aspects of the return to work that need to be addressed. Other employers are reporting that their people are concerned about the point at which they will be asked to return to the office and whether they have received their vaccinations. Whatever the concerns voiced by employees, ensuring that these are sought out and listened to is absolutely vital to a smooth transition to the office. Line manager training and open communication has a direct impact on the effectiveness of each team.

Many employers have reported that whilst employees have been working hard and productivity has been maintained, some have hit a virtual brick wall. Some employees are reporting that they are not working as collaboratively, effectively or efficiently as they would be if they were allowed to return, as they actively miss the ad hoc social interactions with colleagues and general buzz of the office. Therefore, employers will have to accommodate flexible working requests whilst balancing these against the wider impact on their culture so that those who work remotely are not disadvantaged and become ‘out of the loop’. 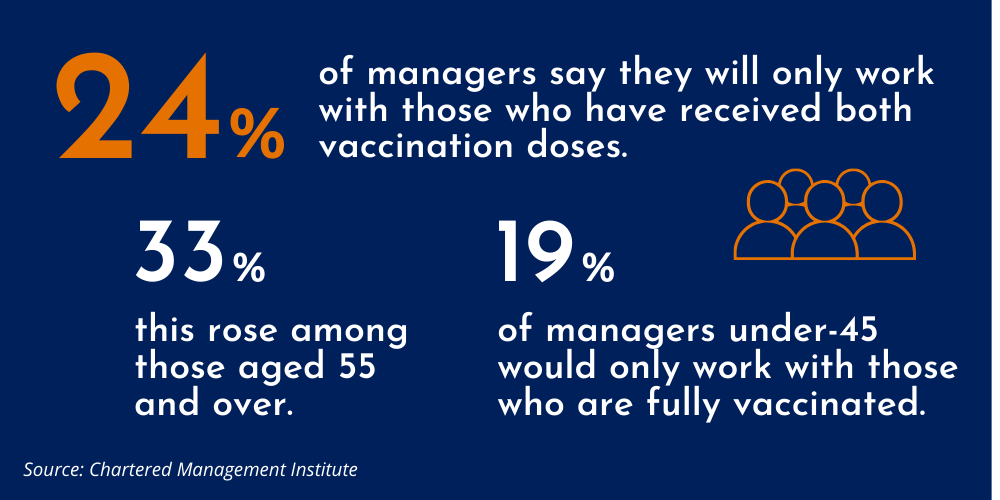 With younger workers expecting a return earlier than their older colleagues, employees were more hopeful about their physical return to work than business owners in a recent survey by the Office for National Statistics. 85 per cent of adults currently homeworking wanted to use a hybrid approach of both home and office working in the future. The study also recognised the role that homeworking was playing as a recruitment tool going forward, with job adverts mentioning homeworking being posted at an increase of 307 per cent of the average in February 2020.

Research published by the Chartered Management Institute also highlighted the risk of a divided post-pandemic workplace. 24 per cent of managers say they will only work with those who have been double jabbed. Among those aged 55 and over, this rose to 33 per cent. 19 per cent of managers under-45 would only work with those who are fully vaccinated. Mutual respect of decisions across companies will be crucial as companies navigate what working post-pandemic looks like. Managers also report fears that staff will leave if some form of flexible working is not offered.

“It is imperative that managers talk to their teams, build trust and respect their medical decisions and their views on the return to the workplace”

The wellbeing of the individual must be the focus of each manager as organisations navigate this transition period. Whilst some love working from home, others hate it. It is also much harder for managers to check in on the wellbeing of their staff. Whilst benefits can be targeted to cover remote workers’ mental health, with apps such as Calm and online workouts being offered by some companies, it is harder for the manager to gauge the need for further support. Whilst reaching out is much more widely talked about, especially in light of the pandemic, it may still be difficult for individuals to do so. Managers need to make sure wellbeing services are in place and their teams have everything they need to be supported – from mental first aiders on hand to Employee Assistance Programmes.

Freedom day might have been delayed, but it will arrive and businesses must take the opportunity to define what the future of their workplace will look like now. As we emerge from the work from home guidance that has been in place since March 2020, there may be plenty of attempts at different combinations of working patterns. This trial and error may be inherent in any first attempts at hybrid working, as each organisation will be shaped by their individual employees. Easing everyone back into the workplace is a change that needs to be carefully managed, with individuals heard and seen at every stage of the process.

What is critical to the success of a workplace designed for the long-term is the level of open communication and shared hopes for the future that create a strong culture.  A strong communication strategy is always crucial to empower colleagues to be open about the trials and tribulations of a return to the office after such a prolonged hiatus.

Employee listening through pulse surveys are a quick and efficient way of gathering employee views. Designed to gather actionable insights from employees, this can help you address any reservations your people are experiencing ahead of 19 July and define the best working arrangements for your company as we emerge from ongoing restrictions. These insights can also help you assess the extent to which hybrid working may suit your culture. We’d welcome a chat to talk through your options – call us today.

Upcoming webinars: Informing discussions for the year ahead

Following on from the successful webinars we ran earlier this year, we have organised two further se...

The next step in the easing of restrictions across the UK is billed for 21 June and employers are re...

Managers are the gateway between strategy and practice

Line managers have played a pivotal role in supporting their teams and maintaining productivity over...