The annual survey of hours and earnings – the 2019 pay landscape

You are here: Home HR Hub Blogs The annual survey of hours and earnings – the 2019 pay landscape
Toggle Sidebar

As the days shorten and Christmas appears on the horizon, we outline the annual figures released by the Office for National Statistics that capture the average weekly earnings for UK workers over the past year.

Data is drawn from the Annual Survey of Hours and Earnings* and also provides an indication of the gender pay gap for 2019.

The weekly earnings for full-time employees reached £585 in April 2019, an increase of 2.9 per cent since April 2018. However, if this is adjusted to reflect inflation, in real terms the median increase in earnings is 0.9 per cent. The effect is that median weekly earnings in real terms are still 2.9 per cent lower (£18 lower) than the peak in 2008 of £603, before the recession. This reflects that the rate of growth is nowhere near the levels experienced before the financial crisis.

Between April 2018 and April 2019, 35.7 per cent of full time employees have experienced a real-term pay decrease or pay freeze, a reduction from 43.3 per cent in the period one year beforehand. This also markedly contrasts to 2011 when it was 60.5 per cent. The number of pay decreases and freezes was remarkably low between 2014 and 2015 at 26.3 per cent, which may be partly attributed to low inflation rates that year.

Consistent with our observations in Paydata’s UK Reward Management Survey, employers are having to offer significantly higher salaries to attract talent. The annual percentage change in hourly earnings for job stayers was 1.6 per cent compared to eight per cent accessed by job changers. This suggests that there is a stronger pressure to increase wages compared to previous years because of this movement in the labour market.

Changes in the labour market

The median number of working hours for full and part time jobs has been stable, with 39.1 hours per week being the average for full-time employees. There has been a decline in the number of hours worked overtime. Mean paid overtime hours have fallen from 2.2 hours per week in 1997 to 0.9 hours in 2019. The number of full-time employees who work overtime has decreased from 28 per cent in 1997 to 16.5 per cent in 2019. This may reflect the general decline in the number of jobs available in the manufacturing industry where working overtime is more commonplace. 42.7 per cent of process, plant and machine operatives were offered overtime in contrast 7.6 per cent of managers, directors and senior officials.

There has been a slow decline in the gender pay gap in recent years, with the ONS noting that changes this year have not been ‘statistically significant’. For full-time employees, the gap now stands at 8.9 per cent.

For all employees, the gender pay gap figures are: 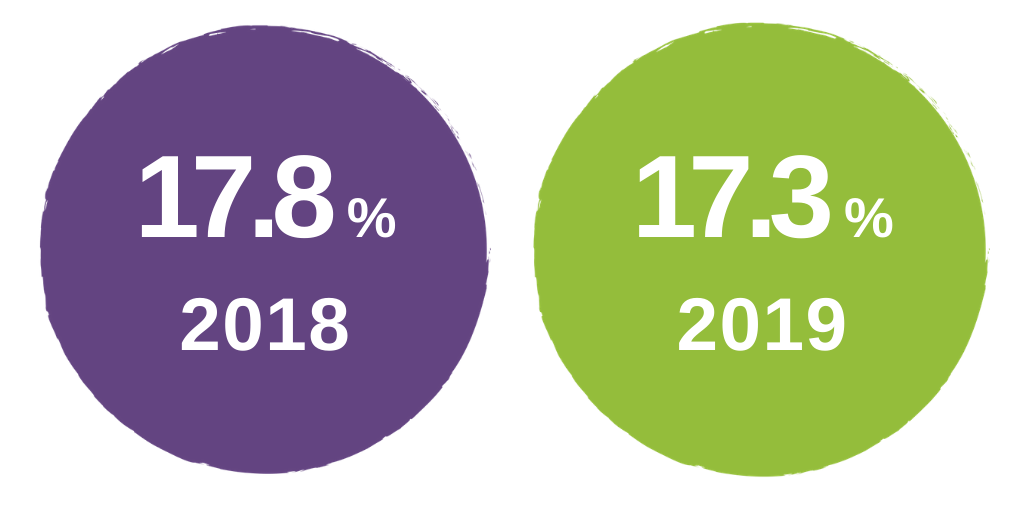 Weekly earnings for women in 2019 have peaked in the age group 40 to 49 years for the first time. This is the first time that earnings for full-time women have not peaked between the ages of 30 to 39 years. The 40 to 49 years age group is the group where the gender pay gap is falling most quickly. However, there was effectively no change to the gap for 18 to 39 year olds, suggesting more needs to be done to tackle the problem at entry level across organisations and effect lasting change.

Part time roles are crucial for some women to enable them to overcome the barriers to senior leadership that many experience in their thirties. Part time jobs tend to have lower pay per hour than full-time jobs and are more affected by increases in the National Living Wage and National Minimum Wage, which have recently been higher due to inflation. This has meant that median weekly earnings for part-time jobs have increased at a greater rate, with earnings increasing by 5.2 per cent, which means 3.1 per cent in real terms.

Read the full analysis in the report here.

Get in touch to discuss the wider pay practices operating within your organisation that can drive recruitment and retention.

* The Annual Survey of Hours and Earnings is based on a one per cent sample of employee jobs, drawn from HM Revenue and Customs Pay As You Earn (PAYE) records.

Paydata’s UK Reward Management survey is currently live. Designed to provide you with a bi-annual ...