You are here: Home HR Hub Blogs Equal Pay Top 10 most populated roles for Males and Females in the UK
Toggle Sidebar

With the introduction of mandatory Gender Pay Reporting (GPR), we thought it would be interesting to take a look at a sample of the market data we hold and compare the population density of male and female holders of the same job from within the following sectors:

Aviation Engineering
Residential Care Sector
Construction and Building Services
Facilities Management
House Builders
Housing Associations
Mechanical & Electrical
Retail
We wanted to identify some of the roles and sectors in which large differences in the male and female populations exist. The results are fairly polarized, with some roles featuring virtually no female employees, and vice versa. The first table displays the ten jobs from our sampled data with the highest percentage of male employees. 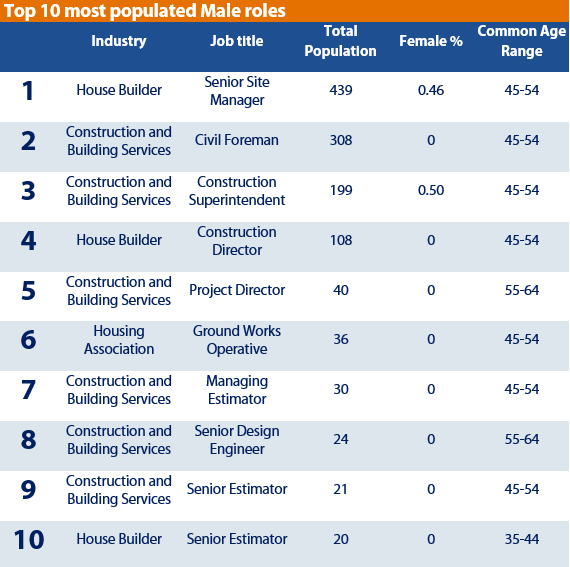 As you can see, the most populous roles for male employees share their position with a miniscule, almost non-existent in some cases, number of female employees; only the Senior Site Manager for the House Builder sector and the Construction Superintendent for the Construction sector, features any female jobholders at all. It is also interesting to note that all ten of the roles that emerged at the top of our sample are of a certain level of seniority, mostly being managerial and supervisory roles.

We can also see from our sample that the 45-54 age bracket features most prominently on this list, even monopolising the top three spaces. Therefore it would appear that, at least for the roles in the sectors from which we took these samples, male employees of this age are more common than female employees. 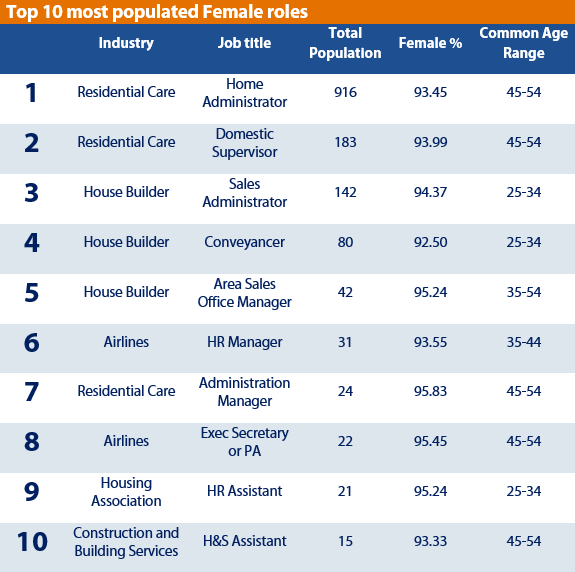 Again, the gender split is pronounced, but proportionally there are significantly more male counterparts to these predominantly female roles. The total populations of the roles in this sample don’t differ too greatly from those of the first, which makes this quite a clear comparison. Our search produced no solely female populated roles, which is interesting, considering we found so many male-only populated roles. Another parallel to our first sample is the prominence of the 45-54 age bracket, which again occupies the top spot and makes up half the entire list.

Examining other criteria, such as the most common age range of employees in such roles, may well assist employers in explaining why the distributions are as they are. For example, the age at which mothers tend to return to work following maternity leave could go some way to explain the sparsity of female employees in a particular sample.

So why is this particularly pertinent in the context of Gender Pay Reporting? Whilst GPR takes a very top level view of gender pay differences, employers seeking to explain why gender pay gaps exist will require an understanding of the root causes of those gaps. The causes may well be related to the distribution of men and women in different types and levels of work. Identifying what those causes are will be the first step towards developing strategies to address them.