Since launching the ‘Closing the Gender Pay Gap’ consultation in July of last year, employers have been keen to find out their obligations when government legislation commences this year. Having collected employer responses by early autumn, the government was due to provide an update in winter.

On the 14th January, Nicky Morgan (Education Secretary and Minister for Women and Equalities), whilst attending the Women and Equalities Oral Parliamentary Questions, noted that the governments’ response to the consultation was to be published “shortly”. True to her word, the response has been published today, reportedly affecting 8,000 UK employers.

From April 2017 private-sector companies and voluntary organisations will be required to calculate their pay gap, publishing the following information annually on their website from 2018, which is signed off personally by senior executives:

The average gender pay gap
The average bonus pay gap – To particularly highlight potential disparities in city bonuses
The number of men and women in “pay ranges”, showing where pay gaps are at their widest.
On this last point, I include below an example noted in last year’s consultation document, from MITIE’s 2015 sustainability report:

Whilst the “pay ranges” approach certainly highlights whether there is a “glass ceiling” for women, the salary bands are too broad to quantify a specific pay gap or explain pay differences, a fact backed up by Carolyn Fairbairn, director-general of the CBI. Ms Fairbairn correctly stated that this data only provides an incomplete picture with part and full-time workers and sector differences also needing to be considered. It should also be pointed out that it is not yet clear whether a like-for-like work comparison of jobs of similar / the same demand is also required.

Using the data published by employers, from April 2018 the government will publish a league table, ranking whole sectors by their pay differences between male and female employees. Despite some erroneous media speculation, the government has not yet decided whether to also publish league tables of individual employers.

The timescale for reporting has drawn censure from a number of areas, such as the TUC, who complain that female employees will have to wait until 2018 to find out whether they are being consistently underpaid.

My reading of this latest announcement is that employers will need to calculate a baseline pay gap figure(s) as at April 2017 and then a subsequent figure(s) in April 2018, which will then be published. This will highlight if any progress has been made between the two figures. Employers will therefore need to identify what is driving the baseline figure and take action to close the gap. A lack of progress may be highlighted in the league tables published by the government in 2018. The timing of the annual pay review will determine how much time employers have to take action. For employers who review their employees’ pay between May and December, their 2016 review will influence their baseline 2017 pay gap figure(s). Employers should therefore not be complacent about the 2018 deadline. This latest development certainly achieves the governments’ stated aim of placing the spotlight on employer pay equality and encouraging employers to close the pay gap. As Nicky Morgan said, that there should be "nowhere for gender inequality to hide". Interestingly, we have also been informed by the gender pay gap team (within the governments’ equalities office); that there will be a second consultation over the remainder of February, until the 11th March. This will seek views from employers on the specific details of the draft regulations. This would seem to back up the general view that the consultation has merely served to underline how difficult it will be for employers to present a meaningful analysis of their gender pay gap. Indeed, the consultation document itself states the shortcomings of publishing one, sensational (and perhaps alarming) pay gap figure that does not explain the pay differences. It is obviously important that the metrics to be reported are clearly defined as there is debate about what is included or excluded, for example, earnings distribution across different levels of income and seniority. To help employers understand what information they will need to publish, I will follow up shortly with a summary of the main points from the latest consultation. In the meantime, with, according to the Ministry of Justice, the average sex discrimination award increasing from £14,336 to £23,478 in the last 12 months, employers are naturally keen to clarify their legal obligations sooner rather than later. In this respect, the second consultation is welcome. Despite this latest announcement, I would point out that the 2010 Equality Act states that ‘employers must give men and women equal pay if they do the same / broadly similar work’. So, regardless of Gender Pay Reporting, it is still illegal for employers to pay men and women differently if they do the same or broadly similar work. Gender Pay Reporting will only serve to place the spotlight on pay equality. Although employers now have greater confidence about the timeframe, being pro-active about quantifying your equal pay position is an essential approach for employers to take, given the potential financial damages from an employee tribunal. Despite this, the results from a recent Paydata survey of 80 organisations, suggests much work is still required by employers, as only a minority state that they have recently conducted an equal pay audit: 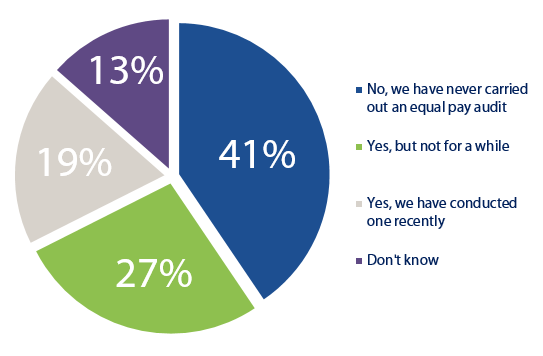 If you have any questions on gender pay or equal pay, or need any help quantifying your position, please get in touch with us.